I am delighted today to be part of the virtual book tour for The Queen’s Vow. This was the first novel I’d read by CW Gortner, and I’m happy to have found a great new (to me) author.

Until reading The Queen’s Vow I knew four things about Isabella of Castile.  First, she reigned Castile in her own right. Second, she married her neighbor, Ferdinand of Aragon – an unusual love match.  Third, she had the intellectual curiosity, or good luck, to fund Christopher Columbus’ voyage to the Americas.   She was the mother of Catherine of Aragon, who married Henry VIII.   That was the sum total of my knowledge.  It turns out I have missed a great woman, mighty queen and fascinating character — and so probably have you. 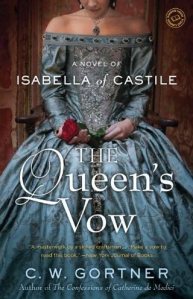 I luxuriated in the plot, characters and detail in The Queen’s Vow,  and  finished it with a deeper appreciation and admiration for this formidable queen.  Gortner brought Isabella alive, weaving a richly detailed story of her tempestuous life. The novel begins with her exile from the court of her half-brother Enrique and follows her ascension to the throne of Castile, her struggles to unite the Castilian grandees, to create Catholic unity and to defeat the Moors.

The novel spans more than fifty years of tumultuous Spanish history, which I imagine was a monumental research effort. Gortner does a masterful job of keeping the pace moving while explaining the complicated politics of the era and Isabella’s changing role within Castile.  Her life from an early age was awash with intrigue and danger and Gortner deftly gives you the “why” without pausing the action. (Thank you!)

Gortner’s Isabella is honest, loyal and devout – possibly to a fault.  She holds the people around her to high standards, but not higher than she holds herself as the last member of the Trastamara family.   Isabella can be a bit arrogant, self-righteous, a little vain, all of which as a reader I could forgive because she shouldered such a heavy burden.  Gortner does a particularly fine job of portraying Isabella’s religious devotion – too often in novels this can overwhelm a character almost to the point of one-dimensionality, but Gortner gets the balance just right between a devout woman and a flawed character.  Isabella of Castile was a mighty queen and makes for a fascinating main character.

Here are a few other posts you might find interesting

Great Blogs on Lots of Things